On the Attendance Letter Editor page, the text content for letter sets can be created and saved. Different language translations can be added for each letter. Letters in each set can be set so that a specific letter is sent to students depending on their current number of applicable absence codes.  Letters in a set will always be sent in sequence, even if a student's absences might qualify them for a second or third letter in a set. They will first be sent the first letter in that set.  The Letter Log (LTL) table is used to determine if a student already received a letter.

CDE - Truancy Information and resources that define truancy and truancy penalties and other related information.

If you have not created any Letter Sets, the list on the left will be empty, as shown below.

To create a new Letter Set, click on the Add button. The right side of the page will display the Letter Text Editor.

To return to Aeries, the main navigation bar is shown in the red box in the image above. Click on the "parallel lines" drop-down to see Aeries' navigation. 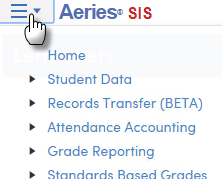 Note:  Districts must have uniform configurations for the Absence Codes for the schools selected in order to use District Attendance Letters. 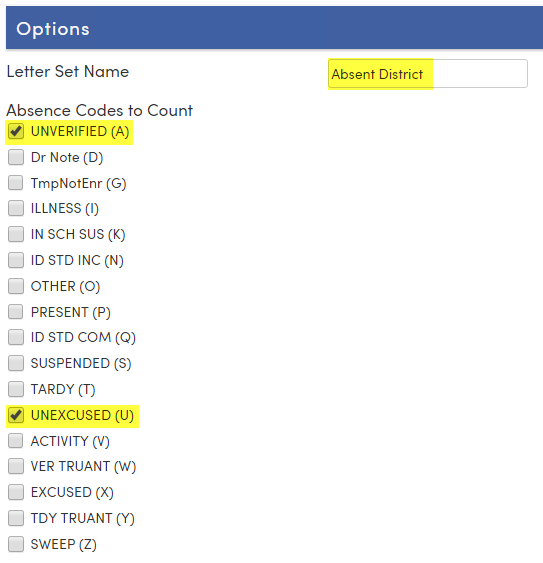 Three tabs are provided for letter text. The text added to the Top Content and Bottom Content will appear on the letter above and below the student's attendance data, respectively.

The text area boxes have Rich Text Editor capabilities which provide the ability to formatting options for font and background colors. This functionality helps achieve a what you see is what you get (WYSIWYG) editing experience.

With these editing capabilities, text can be highlighted with a color or bold font.  Images, font styles, and any number of custom formatting can be applied.  The applied formatting will then be included in the Letters to Print and the email to parents.

A school logo can be added to the letters by using the "Image" icon.    A URL to an image is entered on the Insert Image pop-up.

Note:  The school logo is not designed to go above the address, the WYSIWYG editor only provides a way to customize the top portion of the content of the letter which comes after the header.  The header holds the information for the address and is specifically formatted for windowed envelopes. 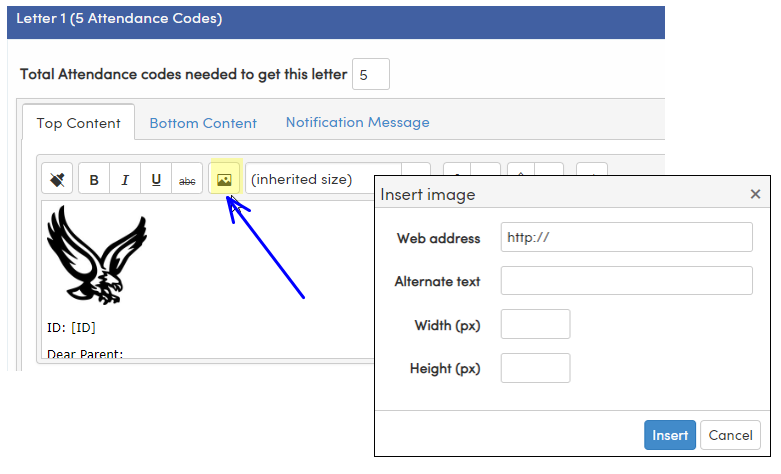 A button bar allows for additional formatting options for the text in Top Content and Bottom Content. Hover the mouse over each button to see a tool tip for the button.

The Letter Text Editor supports two types of special text elements within the Top Content and Bottom Content tabs. Fields from the STU and student related tables can be added, if enclosed with brackets [ ].  For example, [STU.FN] [STU.LN] prints each student's STU.FN and STU.LN fields on their letter.   In addition, LOC can be used in the Bottom Content to indicate the principal and school information.  For example, [LOC.NM] prints the school name and [LOC.PR] prints the Principal's name from each school.

Secondly, the Letter Text Editor also allows the insertion of "custom text" which can be modified for each "batch" or group of letters sent. To include custom text, add [CustomText] into the body of the letter, in the Top Content or Bottom Content tabs, in the place where the custom text should appear.

For example, if the first batch of letters sent will include specific dates for Saturday makeup school, the [CustomText] might be saved within the body of the letter as shown below:

More details about how to input the Custom Text is provided in the Send/Generate Letters documentation.

The first letter created will be the default English letter. To add a translated version of the letter, choose a language from the Add Language drop-down.

The Top Content, Bottom Content and Notification Message tabs will display for the newly selected language, which will have its own language button next to the default English button. Translated text for letters sent in languages other than English must be added to the letter's tabs in a similar way as for the English letter.

The language buttons will toggle through the different language letters that have been added.

Below Letter 1, the Add New Letter button will be displayed.

Press the Add New Letter button and a new Letter Text Editor will be displayed for the new Letter Part.

Fill in the number of Absences Codes to count for this letter part to be sent. Add text to the Top Content, Bottom Content, and Notification Message tabs as needed. Add translated versions of the letters as needed. This process is the same as for the first letter. Continue to add letters as needed.

To save a Letter Set, press the Save button below the Letter Text Editor. If you have made changes to a Letter Set that you do not wish to save, press the Cancel button.

in the language's button:

The default English letter cannot be deleted within the Letter Text Editor. However, the entire Letter Part can be deleted using the Delete button.

If a Letter Part has been deleted, but the Letter Set has not been saved, the deletion can be undone.

After Letter Sets have been created, they will be displayed in a list under Letter Sets on the left side of the page. Click on a Letter Set to open it in the Letter Text Editor.  Make any necessary changes and press the Save button at the bottom to save the changes. 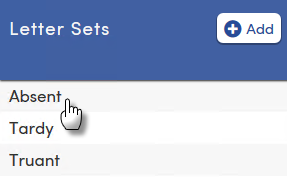