The LETTERS button is used to merge data into a formatted letter. The letters are first created in the Query Letter Text Editor. A query statement is then utilized to pull data from tables and fields. The LETTER button will merge the data from the query into the letter selected.

Press the Tab key until the cursor displays in the white text box. A school heading and date is not required.  When the letter is generated, a school heading for the letter will automatically be created with the school name, address, and the current date at the top of the letter.  This heading will not display in the letter editor but will print when submitted.

An address heading should be created for the individual receiving the letter.  For example, a letter sent to a parent/guardian will use the following fields:

NOTE: ALL field codes are not case sensitive but it is suggested that they be capitalized for easy location in the letter.  They MUST have a square bracket around them and a space between each field but no space within the brackets.

Type the remainder of the letter combined with text and field codes.  An example of a letter is displayed below.  When the Letter is generated a query function is available that will insert either [he/she] or [his/her] in the letter for the proper gender but the gender code must be used in the query statement. Be sure to capitalize [He/She] if it is the first word in a sentence. For example, on the second line where [his/her] is used, if the gender code is F the above letter will read “a copy of her attendance record”.

After the letter is complete, click the Save button and then the Return to Query button at the bottom of the form.

NOTE: Each field code used MUST be in the query statement or this area in the letter will be blank.

The following example is a letter created for straight “A” students.  The letter has been previously created in Query Letter Editor. Several queries need to be generated to separate out data prior to selecting the LETTER button to create the letters.

After the queries have been run click on the Letters button and select the letter to be generated.  The letters will be merged with the data selected and the letters will display on the screen to print. 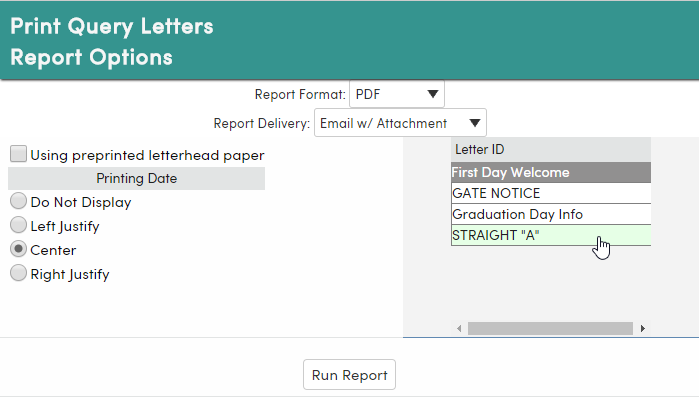