Create Sections for Next Term Print

The Create Sections for Next Term function will create new sections for a subsequent term, based on the sections in the original term.  This function can be used for the current schedule using the MST and SEC tables, or during scheduling using the SMS and SSS tables. The sections are created for any course which has a Next Course (CRS.NC) field populated. 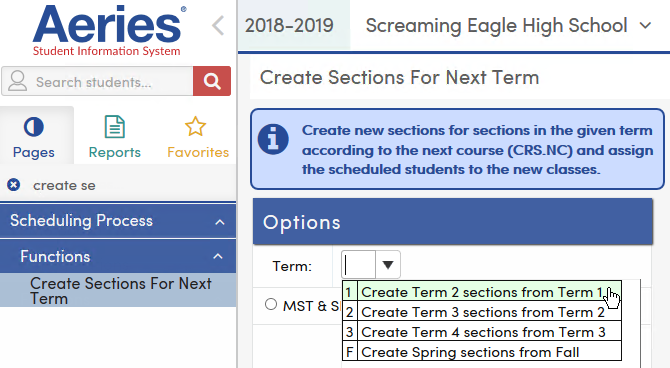 For example, a series of trimester-long Spanish courses (Spanish 1A, Spanish 1B, Spanish 1C) could be scheduled using this function. Sections for the first course (Spanish 1A) would be created in term 1 and students would be scheduled for that term. The Create Sections for Next Term function could be used at that point to create sections for the subsequent course (Spanish 1B) in the next term. The Spanish 1B sections in the subsequent term would be "duplicate" sections:  the same students, teacher, and period. The process would be repeated to copy sections of Spanish 1B from term 2 to sections of Spanish 1C in term 3, using Spanish 1C as the Next Course for Spanish 1B.

Populate the Next Course Field

Add the correct Next Course to each applicable course. The Next Course field can be a different course (for courses taken in sequence) or the same course.

Additionally, check to make sure that no courses include a Next Course, if you do not want sections of the course to be duplicated in the following term.

Run Create Sections for Next Term

Filter Pages by "create sections" or navigate to Scheduling Process > Functions > Create Sections for Next Term. 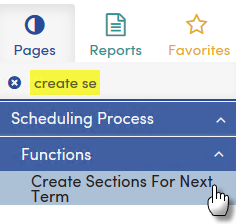 Select the term which will be used to "originate" the sections. In the example below, F is chosen. Spring sections will be created from any existing Fall section for a course which has Next Course (CRS.NC) populated. 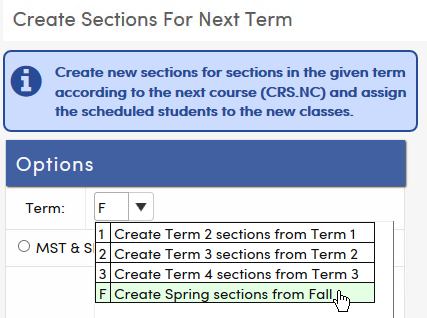 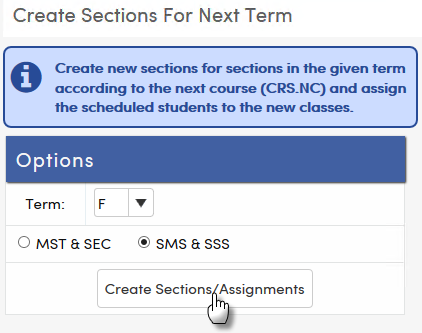 Press the Create Sections/Assignments button. A confirmation popup will be displayed.

Click the OK button to continue. Another confirmation popup will be displayed.

If the process is run twice, sections for the next term will be created again and duplicate sections will be created in the following term. Click OK if you want to continue. An informational message will be displayed: