This error occurs when there are SCSC records with Carnegie Units Earned greater than 1.0 in the file.  Here is the definition of a Carnegie Unit for CALPADS reporting:

A Carnegie Unit is granted to a student completing approximately 120 hours of class in one subject over the course of one year. For example, a total of 120 hours in one subject—meeting 4 or 5 times a week for 40 to 60 minutes, for 36 to 40 weeks each year—earns the student one “Carnegie unit” of high school credit.

For the CALPADS extract, the Carnegie Units Earned is now calculated by taking the Credits Completed for the course on the transcript (HIS.CC) and dividing it by the 1 Yr Crs Units field (LOC.YCU) on the School Information page. If a district is getting unanticipated results, they should review this setting for each of their secondary schools. For example, if a middle school gives students 1 credit per course per semester, their setting should be 2 units, not 10.  For most secondary schools who award 5 credits per semester, the 1 Yr Crs Units should be set to 10. 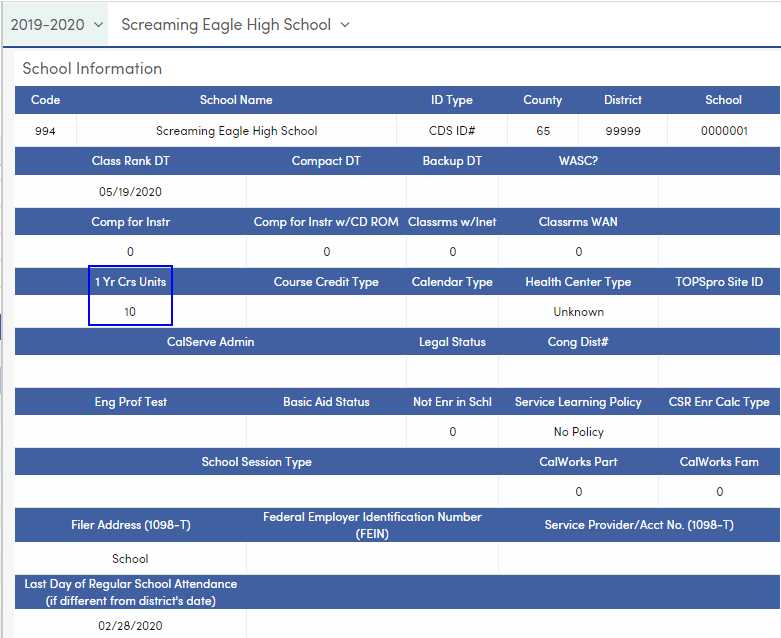 District’s should NOT assign more than 1 years’ worth of credits completed for a course in a single academic term; they would need to break it up into separate records, either by a different term, or section.

Also, schools should be entering college courses into their transcripts in order to count towards the students' College and Career Indicator status. However, if the college is reporting more units than the school gives out in 1 year, they should translate it to match the school's value in their 1 Yr Crs Units field on School Information.

This may mean a change in procedure for the way some credit recovery or alternative schools have been operating. In order to avoid generating the SCSC0230 error - Duplicate SSIDs submitted for the same course section, SCSC records are being consolidated (credits added up) if they have the same School, Year, Student ID, Academic Term, Course ID, and Marking Period

Note:  If your school is awarding partial credits during multiple marking periods for the same Course Section and Academic Term, you may receive this error if the consolidated credits calculate a Carnegie Units Earned value greater than 1.0. If that is the case, you may need to take the HIS record(s) that caused the combined total to equal more than 1 years' credit and move it to either a different Course Section or Academic Term.

While the majority of courses are worth one Carnegie Unit, there are instances where a course is worth up to two Carnegie Units. Therefore, the severity of IVR SCSC0513 was changed from a fatal to a warning on June 16, 2020. In the future this IVR will be modified to allow no more than 2 Carnegie Units.