The Load State Learning Standards page is available in District Aeries to users logged in with an Admin-type account. The page has 4 tabs to update/load the California, Common Core, CA ELD, or Next Generation Science standards. 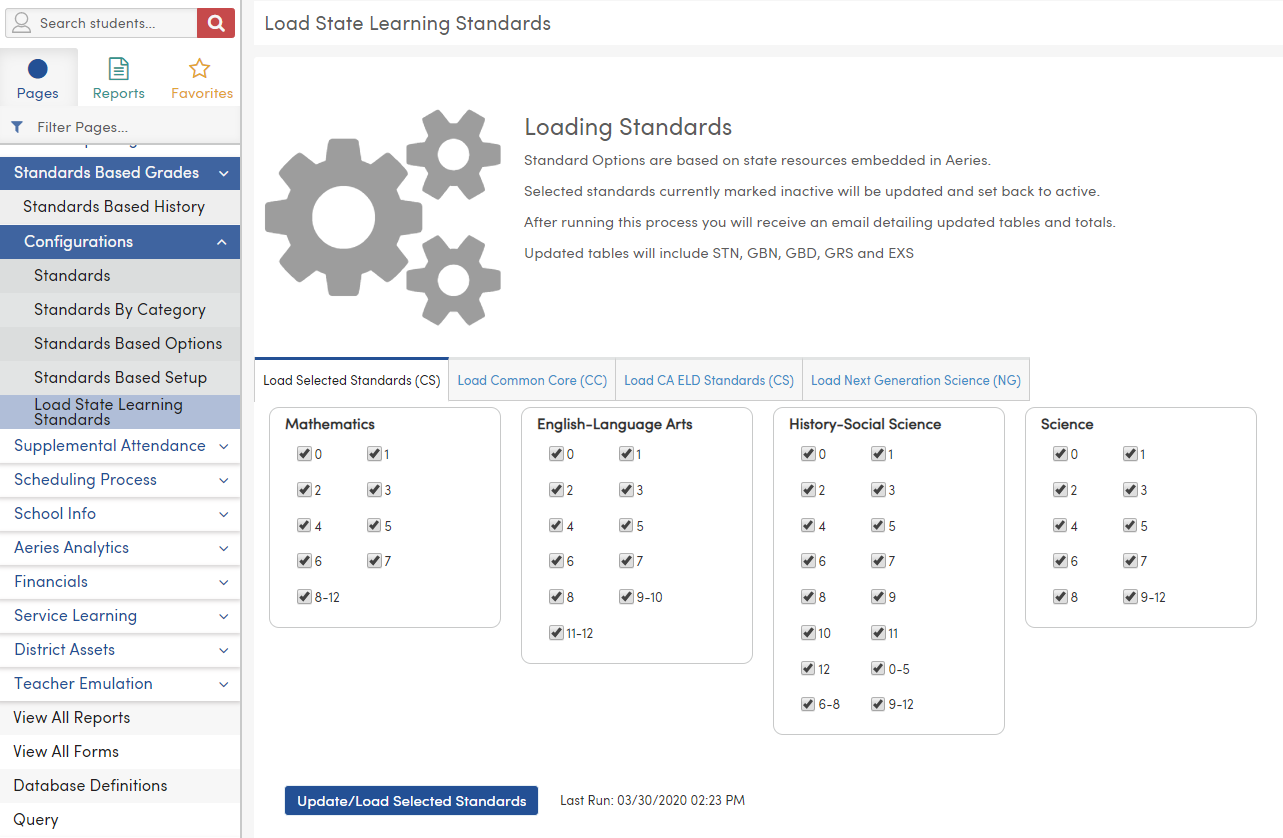 By default all of the grade levels are selected for import. Grade levels can be de-selected by clicking in the boxes next to the grade to remove the check marks.

NOTE: It is important to back up the database before mass importing or mass updating standards.

In the below example the 6th - 12th grade Common Core standards are being imported into the database for the first time. The Kinder-5th grade are de-selected by clicking into the box next to the grade to remove the check mark. Then the Update/Load Selected Standard button is selected. A message box will display confirming that you want to import the standards for the selected grade levels. Click on OK. 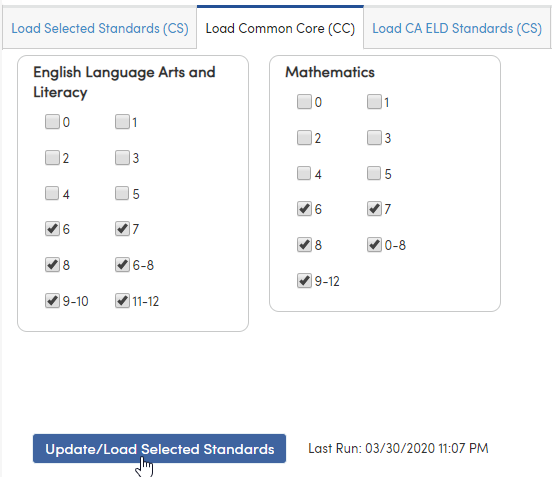 The Update/Load Selected Standards button will change to an Info box explaining that the process is now running and the Last Run time is updated to the current date and time.  After the process completes a completion email is generated which lists the type of standard that was imported, the subjects and grade levels that were selected, and the number of new standards that were added to the Standards (STN) table.

It is important to back up the database before updating previously loaded standards.

In the below example the database has been backed up and the Common Core Standards are going to be updated for all grade levels. By default all Common Core subject areas and grade levels are selected, so no changes need to be made and the Update/Load Selected Standards button can be selected immediately. The message box displays confirming the import of the standards for the selected grades. Click on OK. 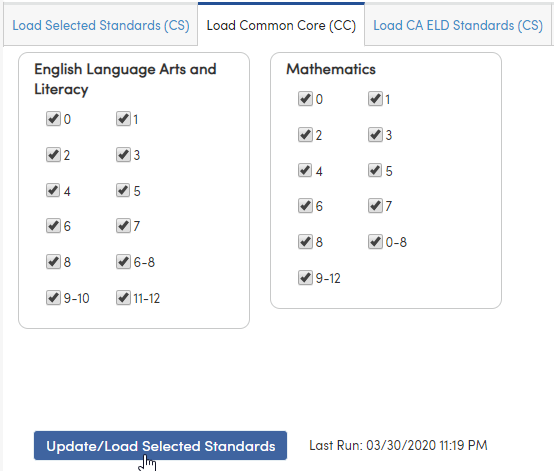 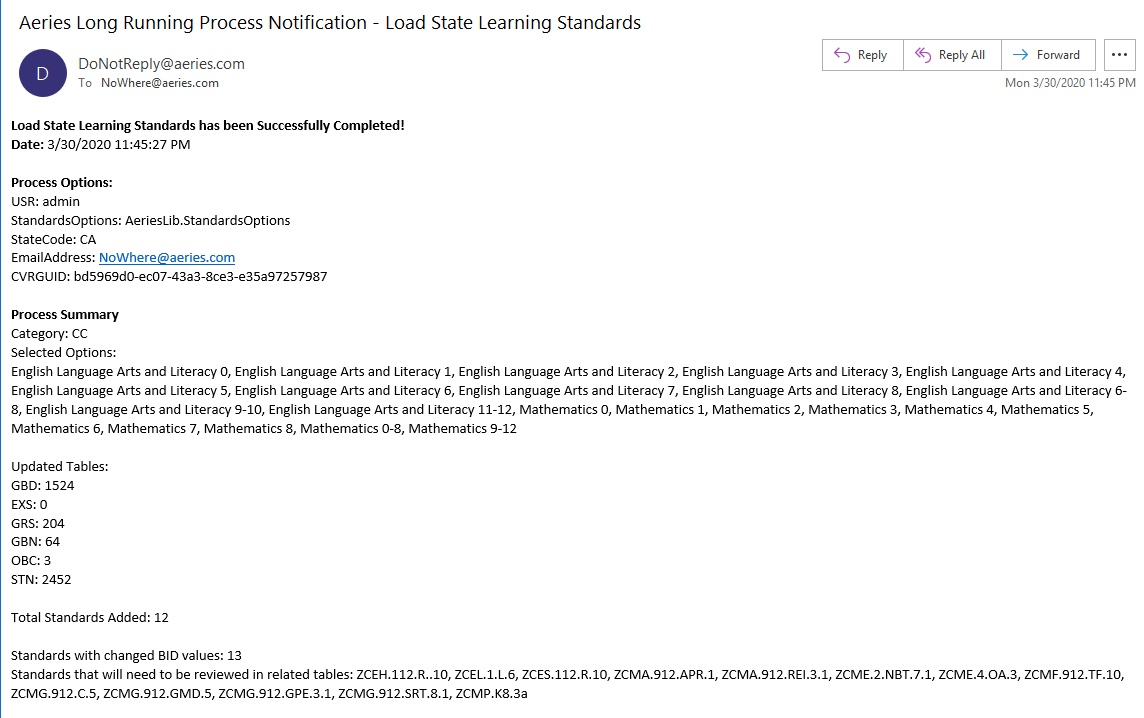 NOTE: Certain fields in the Standards (STN) records used for Standards Based Grade Reporting will not be updated: Title (TI), Mark Types (M1 - M4), Correspondence Language Title (TI1 - TI6), Correspondence Language Code (CL1 - CL6), Count on Missing Mark (MM), and Include in Transcript (IN1, IN2). Also Long Description (DE) will not be updated if the updated standard does not have a value in Long Description.

Depending on when the standards were initially loaded into Aeries they may be updated in several ways during the import:

In the below example the Description and BID of several standards is the same, but the standard IDs (STN.SD) have changed. The update process will change the SD value in the Standards (STN) table to reflect the value and make the same change in every related table where that SD exists so system-wide all standards IDs will reflect the correct STN record.

The related tables should be reviewed to determine if the "Z" standards should be manually replaced with the "new" standard ID.

After the update process completes the completion email will list the standards that have been updated with a "Z". Some analysis should be done to determine if these standards are used in any related tables and if they should be manually updated to the new standard ID or some other standard ID.

Please see the Load State Learning Standards Tables and Security article for a list of related tables and fields that may contain references to standards.

updated with the “Z”.

select * from EXS where bid in