The NSLP Import process will use the NSLP Data file from the location defined in the NSLP Import page, or by the data file provided in the one-time upload. When doing an automated upload, it is important to remember to refresh the file location with a new file before the next scheduled run; otherwise, the same file will be processed over and over again.

Tip: It's important to not have any overlapping dates in the import file, otherwise duplicate FRE records may be created.

Once the NSLP import has completed, an email will be sent to the email address(es) defined in the NSLP Import page.

The body of the email will report summary information such as the date and time the NSLP Import completed, and the number of records matched, unmatched, active FRE records not in the data file, and records with errors. The email will also contain completion report attachments for the NSLP Data file. 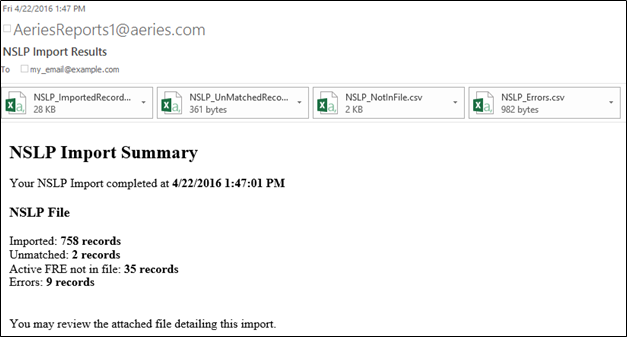 In the below example one record has an invalid NSLP Code, one FRE record was deleted because it was overwritten by the NSLP Data file record, and two FRE records were deleted because they had no Eligibility Start Date.