Select the Field CD and enter all student infractions listed in the Ed Code, the school/district handbook(s), Board Policy, etc. The drop-down listings on the Assertive Discipline and Discipline forms will display the information entered in the Code Table.

All Disposition (DS) codes will be set up in the DSP table and should contain all penalties or consequences. The disposition codes can also be sorted and can be translated into up to six languages.

Suspension codes need to start with "SUS" for the Suspension letters to print the total # of days. There can be additional characters after "SUS, but they must start with those characters for the system to recognize what they represent.

From the School Info | Configurations node on the Navigation tree select Update Suspendable Offense Codes. Enter all suspendable infractions, citing Ed Code sections, Board Policy, etc.  Indicate whether each infraction is reported on the Crime Report, could lead to possible expulsion, etc. The Suspendable Offense Codes can be translated into up to six languages. Select the Correspondence Language button at the top of the screen to view the translations.

The following is an example of a Discipline Letter Text Editor. 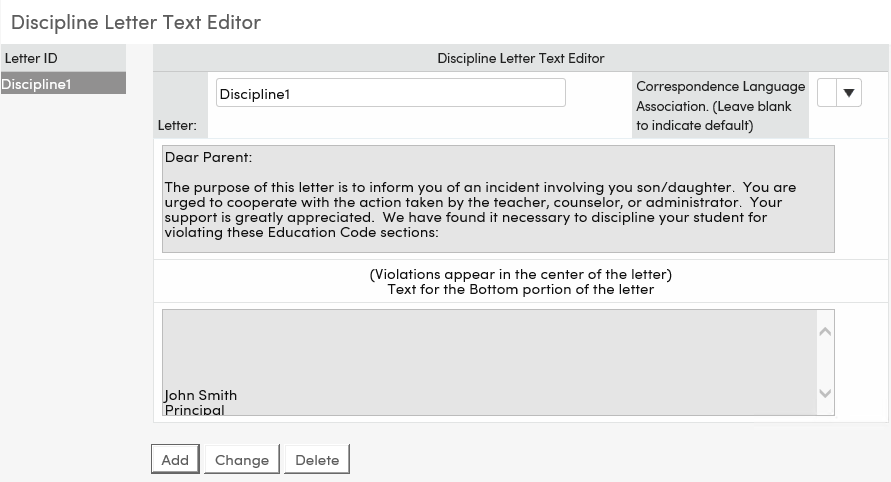 The following is an example of a Suspension Letter Text Editor. 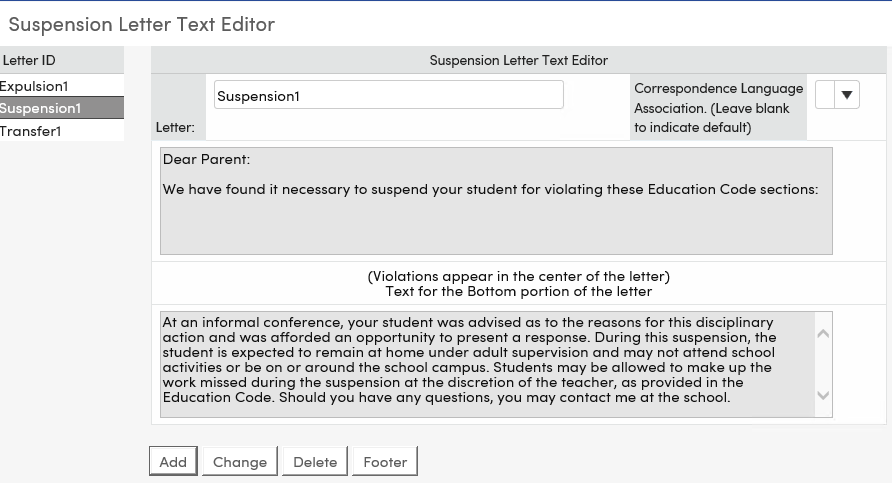 Letters can be created for a non-English language using the Correspondence Language field. Click on Add to create a new letter. The letter name must match the name of the original English letter. For example, if creating a Spanish letter for ID Suspension1, the title would be Suspension1 Span for the Spanish letter. Populate the Correspondence Language field with the language of choice, for example 01 for Spanish. The pre-filled header is automatically translated to the language chosen. The body of the letter, including the footer, will need to be translated in this form by the District prior to printing. When selecting this letter to print to the parent/guardian, if the student has the same code in the STU.CL field, this letter will be printed in the correspondence language.

The Footer button will open the Misc Suspension Text Change Form.  This form is used to store the text that is auto inserted into the center of the letter where it reads (Violations appear in the center of this letter) shown above.  The ID's labeled Susp Text 1, Susp Text 2 and Susp Text 3 have default paragraphs which can be edited. Footer text can also be translated into a non-English language and should have the same naming convention as shown below.

Fields that can be auto inserted into the footer of your Suspension Letter include the following:

[FN] - This will display the student's First Name *

[LN] - This will display the student's Last Name *

[PG] - This will display the Parent/Guardian name *

[Total Days] -  This will display the total number of days the student is being suspended according to the Administrative Action code (Out of School Suspension).

The field data in brackets must be typed exactly as shown above including the brackets.

*Only those with asterisks above can be incorporated into the body of the letter.

When printing the Suspension letter, the following options are available: 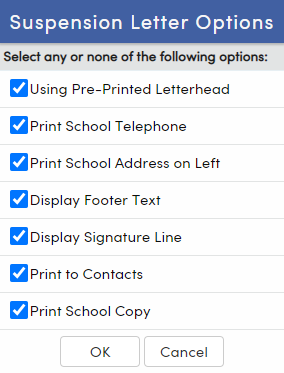 * When printing a School Copy of the Suspension Letter, the text will always print in English.