The Import Fixed Length Files form is designed to load the results of various test files for the current year and previous years into Aeries. This form is available in Aeries Client Version and can be used by the District or School. The form may vary slightly but the procedures are the same.

The School or District version can be used to import the SJCOE Physical Fitness files and can select which record layout to be used when loading the test scores. After the test scores are loaded they will be stored in a local table. Remember that when you are using a local table it is not accessible from another machine. Once the file is loaded if a new Aeries Version has been updated the data in the local table will be deleted and the file will need to be re-loaded.

Once the data is loaded it will be compared to the STU table to find student matches. The match will be performed and will compare the SSID or Permanent ID from the file to the STU table. After the match is complete the Print Unmatched Records report should be generated to list unmatched students. The permanent ID, school number and student number can then be located for unmatched students and can be manually updated.

When the matches between the two tables are as complete as possible the PFT table can then be updated using the Update button.

NOTE: It is the Districts responsibility to verify that the match has been performed correctly prior to updating the PFT table.

Starting with the 2016-17 Physical Fitness testing administration the only file layout available is the one from SJCOE, for example the 2017-18 Physical Fitness Test - LEA Student Scored (PFT18SJC) for the 2017-18 testing administration, which is the state testing vendor. The student results file from SJCOE only contains test scores and the Passed/Not Passed flags for grades 5, 7 and 9. If the districts also tested other grade levels, such as 10th grade, they will have the raw fitness scores in Aeries for grade 10 but the Passed/Not Passed flag will need to be hand calculated and added to the Physical Fitness form.

If a District used EDS it is suggested that the EDS Fitness 2016 Score File be loaded. This file contains ALL scores and Passed/Not Passed Flags for ALL students that took tests at the District.

Click on the Name of Layout drop down and a list will display of record layouts available for importing. Select the PFT18SJC record layout to be imported.

Click on the Import button. A message will display indicating that the record layout has been added. Click on the Exit button.

Once the record layout has been imported it can be selected from the Select a Record Layout to Import drop down list.

The path and file selected will display. Click on the Load button. The form will display the information for the first student located in the local table.

The Matched To information will display zeros in the Student# or Perm ID field for all students. The Tot Rcds in File and Tot Unmatched Rcds at the bottom of the form will display the number of records loaded into the local table.

Click on the Match button and a message will display. Click on the Yes button. The following options will display in the order that the records will be matched. The order can be changed by hi-lighting the input field and using the up or down arrow keys on the right. Select the LN, FN, Birth Date and move it to the top. Click on the OK button. 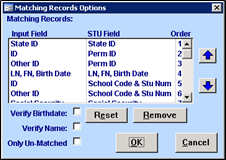 When the data match has completed a message will display. This message includes the number of students that were matched. Click on the OK button. The Import Fixed Length File form will now display a Student # or Perm ID # for students located in the STU table. Unmatched students will display zeros in the Student# or PermID field.

To display only unmatched students click on the Show Unmatched Test Records Only box. The only students displayed will be students containing zeroes in the Student# or PermID field. These students can now be manually matched.

To sort students by name click on the Sort by Name Only box. The data will now display in student name order. To locate a student in the STU table to be matched to the student displayed click on the Stu Lookup button.

The following selection box will display. Enter part of the student name in the text field and press Enter. If the student is located click on the student’s name and then on the OK button. The Student# or Perm ID number will be loaded.

Due to possible data errors or students no longer enrolled in the District some students may not match. Prior to running the Update function it is suggested that as many students as possible be matched. Reports are available to provide lists for research.

Click on the Reports button. The following form will display with the current Record Layout being utilized at the bottom.

The Print Unmatched Records report can be utilized to try and locate students in the STU table for manual entry. If a student is located the student number can be logged onto the report. The correct Student ID can then be manually entered on the Import Fixed Length File form.

To print a listing of unmatched records click on the Print Unmatched Records button. A report will be generated with the students imported into the local table that currently do not have the Student ID in the table.

The Print Record Layout report generates a listing of the fields and their descriptions for the file being utilized.

After the local table is matched and students have been manually updated, the data can then be loaded into the Aeries Testing tables. Click on the Update button and the following message will display. To update the scores into the Testing tables, click on the Yes button.

An option to Only Load Pass Flags appears. Answering Yes to this option will only update the Physical Fitness Test Pass Flags, the existing fitness scores will not be updated. This will preserve any values that have been entered into Aeries including those that are above the State maximum. Answering No to this option will copy the scores from the file as well as the Pass Flags. The fitness scores in Aeries will be overwritten with the scores in the file.

REMEMBER:  Prior to updating the test scores it is the School or Districts responsibility to verify and match the student’s correctly to ensure the scores get loaded into the correct student record.

After the update is complete a message will display with total records processed, total records not matched and total new records added. Click on the OK button.